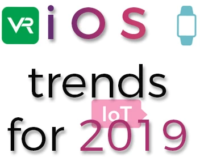 Second name for iPhone is change. Every year it brings new changes whether it is hardware or software update. Over the years, the app has seen many changes which prompted more and more companies to take a closer look and adapt to its attractive features. IOS developer has to be very updated to these changes. The newest version of iOS, iOS version 12. The operating system that runs on all iPhones and iPads.

Now talking about iOS app development trends that will dominate 2019 are:

2. IOT – Allow users to communicate with and control connected accessories in their home using your app. With the HomeKit framework, you can provide a way to configure accessories and create actions to control them. Users can even group actions together and trigger them using Siri. With update of new technologies, we as a human being are enjoying digitalized world.

IOT HomeKit is what Alexa skills are to Amazon, or what actions are to Google. It’s that intangible, but vital in-the-background software that makes it possible for you to turn on your smart lights every morning with a simple Siri command (or from Apple’s iOS-only Home app).

Let’s clear this with example- If I train my machine 100 times showing pav bhaji image as fast food, then at 101 result it will automatically predict that pav bhaji is “fast food” same ways go with salad’s if I train my machine that the image of salad is healthy food then the final result it will predict is “healthy food”, so we need to train our machines first. So Apple has come up with these apps so that the customers can enjoy these features.

4. Artificial Intelligence – Ever since apple launched Siri it has been famous worldwide. Siri is like Amazon’s Alexa. I hope everyone out there must have seen advertisement of Alexa, it’s the same way Siri works in apple but Siri is way smarter than Microsoft’s Cortana and Amazon Alexa. As per the report of Loop Ventures, Siri gave correct answers to over 70% questions. Over the period, it keeps on gaining ground for assisting the users more efficiently.

Apple has brought Sirikit to facilitate iOS app developers to integrate the Siri advancements. When you hire iPhone app developers, they can build amazing apps with the Siri-based features by using the Sirikit and Shortcut. In the coming days, Siri will remain a key feature for AI-based business apps.

5. Augmented Reality – Augmented reality or AR allows people to add digital elements into their actual environment. Now talking about Augmented Reality for iOS app development, Apple has come up with an update of ARkit2 a newer version of ARkit in iOS 12. From improved face tracking to 3D object detection, the ARKit 2 is equipped with several innovative features.

ARKit 2 is designed to enable the users to create an AR-based art that can be viewed by other people in the same place anytime. What’s more, the SceneKit is very useful for designing lifelike 3D graphics. We can expect that the AR technology will be integrated in a big way soon in the customized iOS apps.

There are so many exciting iOS development trends. I have tried to include the most impactful points which can help you understand iOS App Development Trends that will dominate 2019.